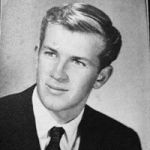 Growing up at the beach, I was in the water all the time. One of the scariest things that can happen is getting caught in that washing machine when big wave after big wave comes pounding into shore and you can barely get your breath in between and you wonder if you’ll make it back to shore, how you’ll ever get your feet under you again. That’s what grief is like, that’s what events since August have been like. I will be glad to see 2013 go with its bad news and heartbreak. Here’s hoping it’s all out of the way now so 2014 will be better.

I don’t need to write about my brother because Richard Russo already did for the most part in Nobody’s Fool. There’s a lot of him in Sully. Or vice versa, I’m not sure. Paul Newman played him in the movie. Appropriate. Handsome with eyes every bit as blue.

What do you take from real life into characters? What ignites that alchemy? Recently I was asked out on a coffee date, then the day before he decided that a Catholic who loves bacon was unacceptable to a self-described “tapas-loving Buddhist.” I would have never imagined that interaction! (it’s just coffee!!) So there’s a seed for a scene or a couple of characters. And that is where improv comes in. A premise, strong characters…

In his incredible Wonderbook: The Illustrated Guide to Creating Imaginative Fiction, Jeff Vandermeer quotes Philip K. Dick finalist Karin Lowachee who says, in part, “An actor once said that acting to him was ‘finding truths in imaginary circumstances,’ and I think that applies equally to writers. Writers, to me, are very similar to actors in how they engage with their process and with the ultimate work. It’s just that actors output through motion and speech, and writers output through the written word.” (17)

Sometimes it is hard to say “yes and” to life. And yet we do and we keep going, keep creating, and sometimes, if we’re lucky, spin grief into art.

2 thoughts on “a death in the family…”